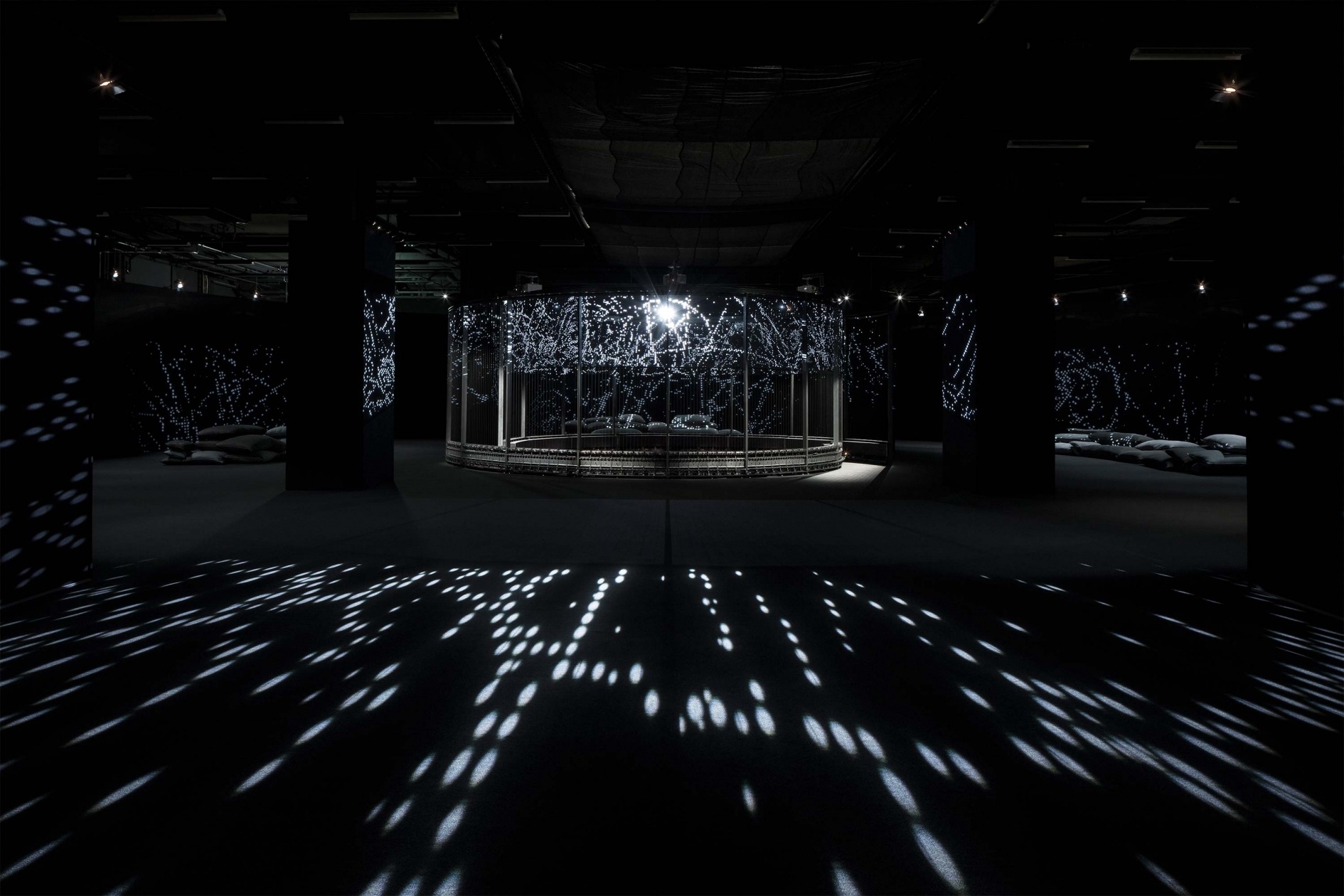 Working in collaboration with guest curator Mónica Bello, Head of Arts and first curator at CERN, the European Laboratory for Particle Physics, the duo took the ATLAS particle detector experiment constructed at as their lead, investigating the concept of unwanted data and using it purely for its aesthetic value rather than for the information it contains. Here, Jarman explains all…

Our interest has always been in the material nature of the physical world – and how we experience that. Quite early on we realised that, because there is matter that exists beyond the limits of our perception – that we can’t see or hear, or events that occur over very long or short timeframes – we needed to turn to the tools and processes of science. 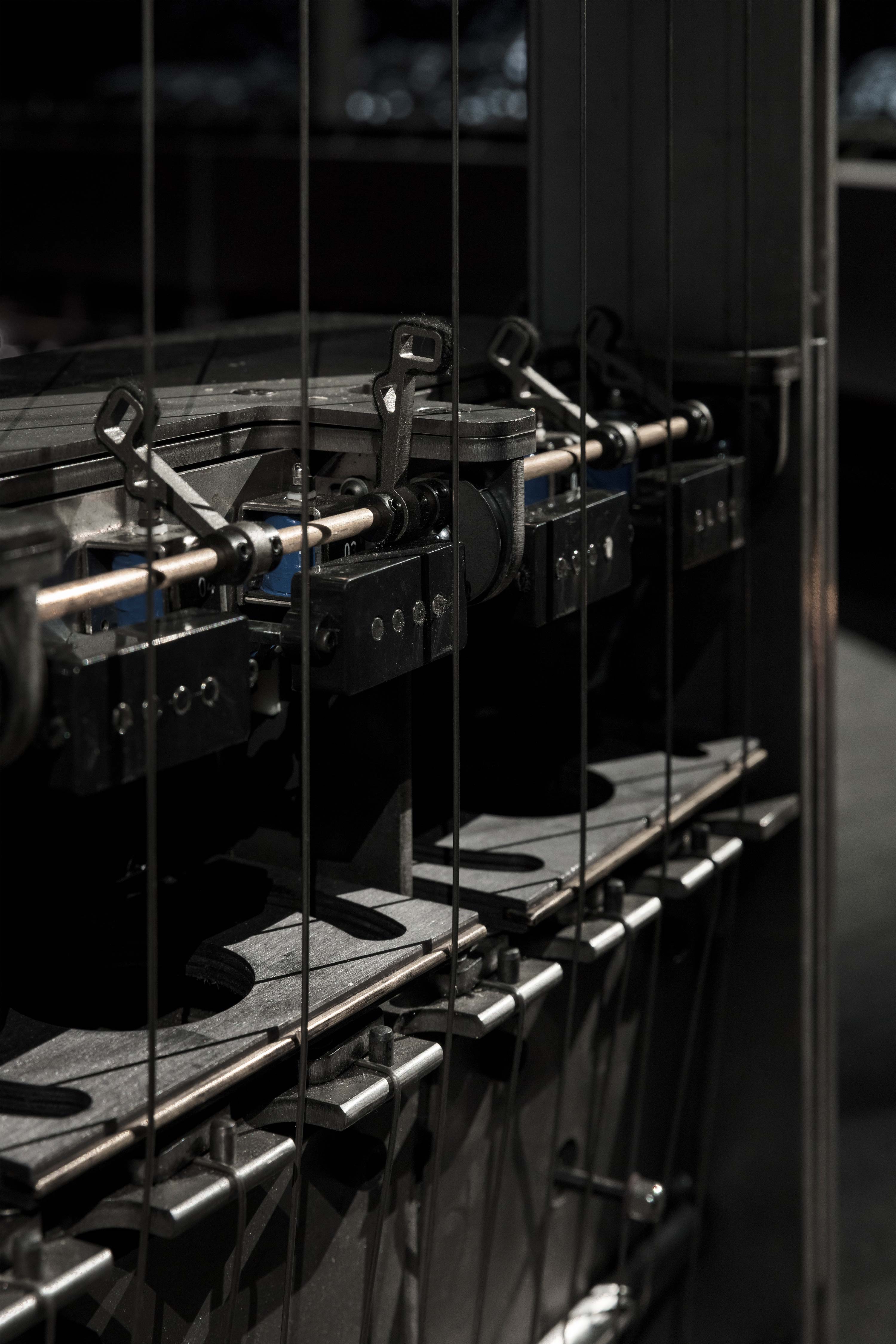 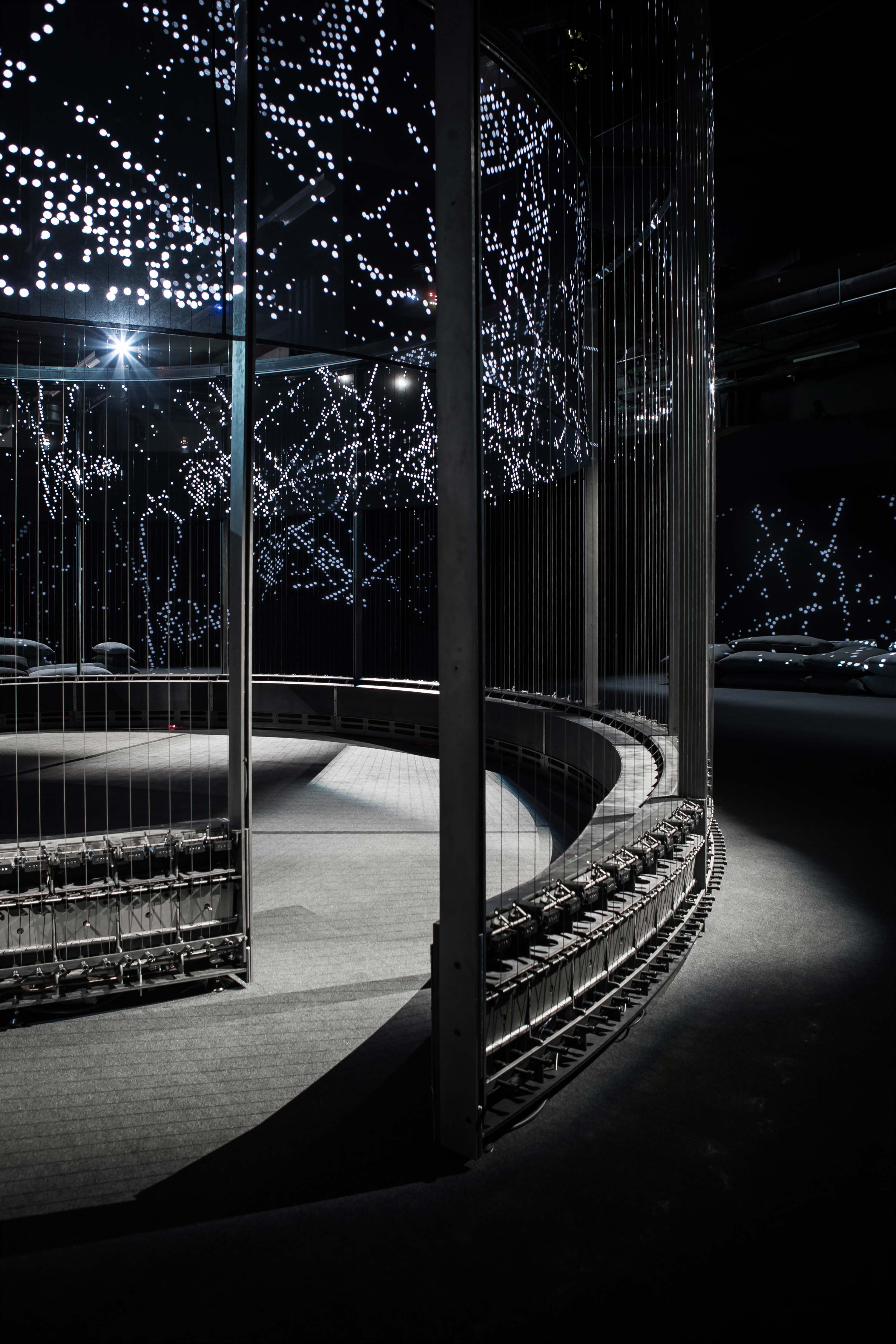 So we started working with scientists. At the time, we thought we were just looking at matter, but the more we worked with science, the more we realised that it came with a very specific signature – it had its own language. And so, as time went by, we started asking more philosophical questions about science and how it presents nature to us. In other words, we’re interested in how science and technology mediate nature to us – and creating experiences through that language of science.

For HALO, we were invited to create the fourth Audemars Piguet Art Commission, working with Mónica Bello as artists in residence at CERN for three months. We were specifically interested in looking at the masses of data that is being collected there. In very basic terms, what they’re doing at the Large Hadron Collider is sending protons in two different directions around a 26km circular tunnel underground, so that when they collide they produce new particles. And they’re looking at those new particles and seeing what comes out of it. And obviously, they have very sophisticated ways of doing that.

This process results in images they call ‘event displays’, presenting the information they collect in a way that can be read and interpreted, recording the energy in different particles and things like that. But we wanted to look at the data in as raw a form as possible. So we went back to the ‘minimum bias data’ which – as the name suggests – hasn’t been changed at all by the scientists. There’s so much data that comes out of ATLAS that, somewhere along the line, they have to make decisions about what data is kept because it’s useful to them and what to discard. So the minimum bias data has lots of stuff in there that, while it may not be useful to the scientists, it looks beautiful: you get these dots and tracks in the way that it’s displayed. 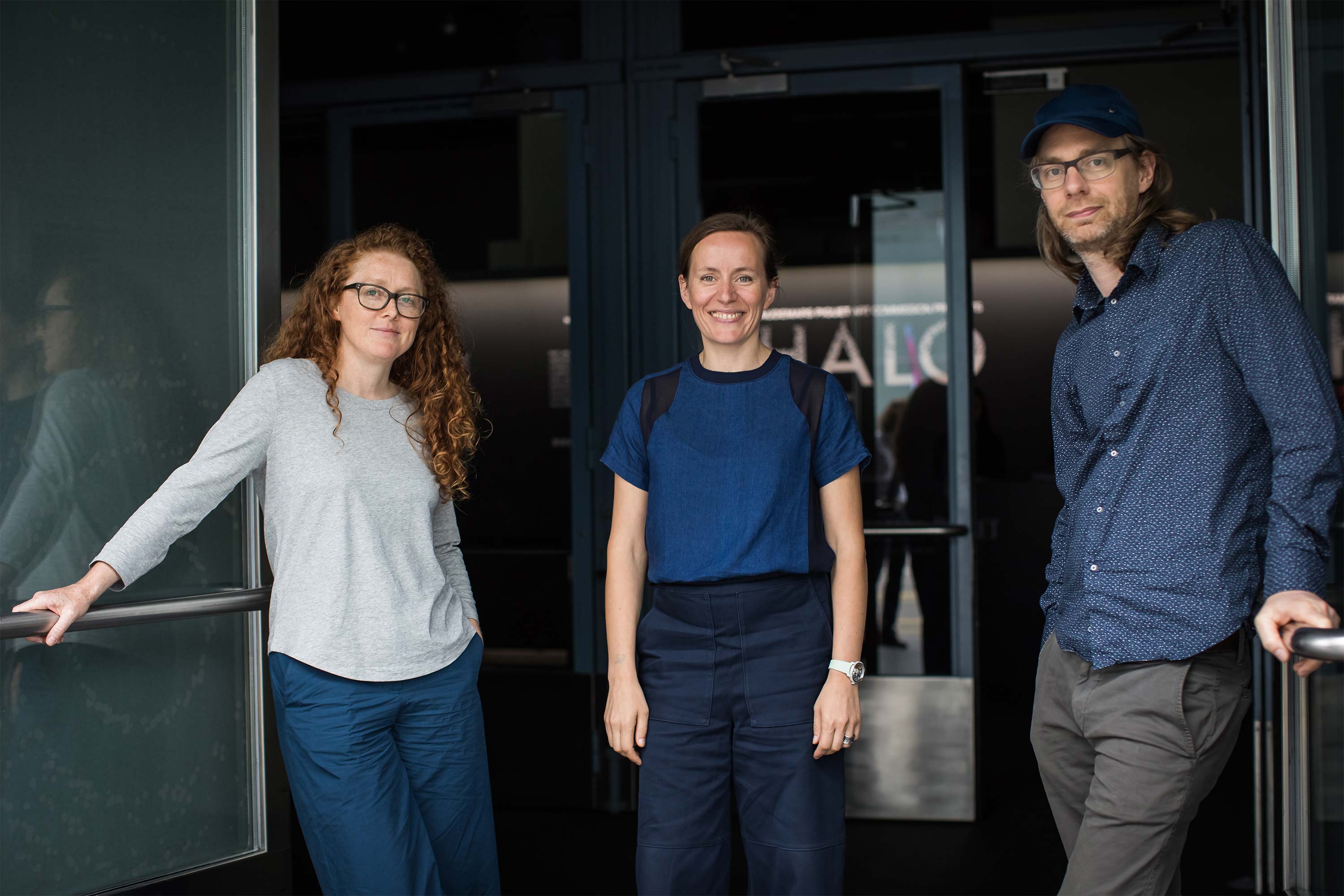 We were also interested in the actual materiality of the data: the sculptural qualities of it. The experiment itself is like a long barrel, and the data comes through it: it exists in 3D space. So each of the individual points in HALO represents individual points in space. We were interested in presenting information scientifically but also finding a way that we could experience it in a way that transcended that, so it almost becomes a phenomenon in its own right. You get a sense that there’s a certain complexity going on in the image and that there’s nature involved somewhere – there’s some sort of chaos going on – but you also have this framework of something manmade, and we like the interplay of that.

Normally each event would happen close to the speed of light, and it is measured in microseconds – one microsecond is a millionth of a second. So you can see that it is something that occurs completely beyond the limits of our perception. And what we’ve done is slow each event down to actually experience it. And each event animates using time-stamp data. When you watch each of these events after the other, what starts to happen is your brain naturally looks for patterns in the data.

There were lots of challenges with accessing the data in the first place: we had to convince lots of people that it’s a good idea to let some artists work with their scientific data! We had to promise that the data wasn’t going to be readable scientifically in any way. But that was never our intention. 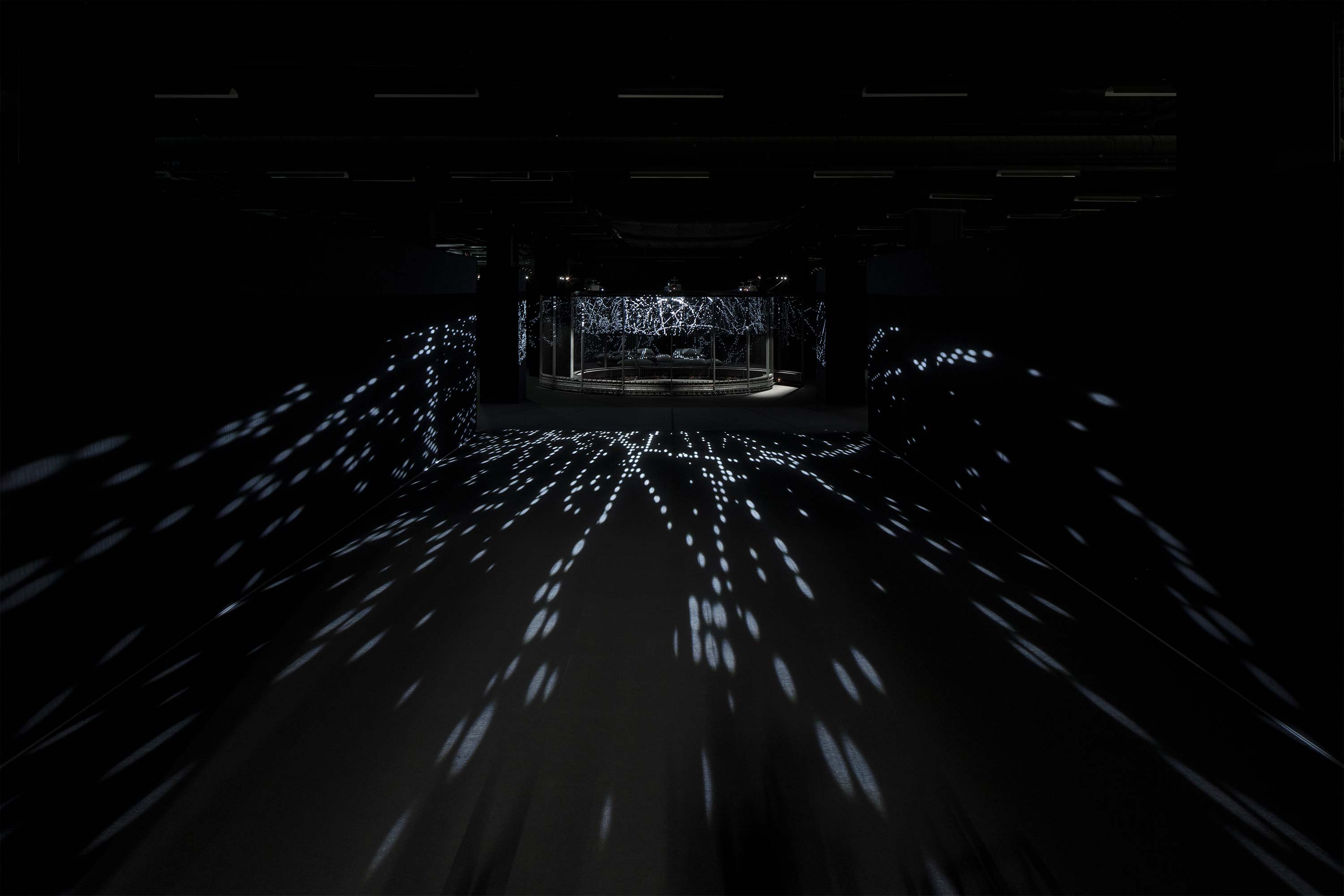 We were lucky enough to meet with Mark Sutton while we were at CERN, who is also a fellow at the University of Sussex, near where we’re based. He’s responsible for the algorithms that decide which data should be kept and which discarded. We spent many days with him going over and over the same questions until we really felt that we understood how it worked. It was literally on the last day of our residency that somebody agreed that it would be OK for us to use the data.

The instrument we worked most closely with was the TRT (Transition Radiation Tracker), which contains 30,000 ‘straws’, inside each of which there is a copper wire. When electrons move through this instrument they will leave a charge on the wire, and then they can define where that point is in space. This helped us to define the structure of our artwork, HALO. The cylinder shape of HALO is like turning ATLAS up on its end, so you’re placing the viewer in the middle of the work. We also took inspiration from the wires inside the straw trackers, and they became part of the installation structure.

Inside the structure of HALO is a 360° projection screen, and running vertically around the entire structure are 384 piano strings. All along the bottom is a soundbox, and mechanisms which enable piano-like hammers to hit the strings. And depending on when and where the data is projected onto the screens, it will also play a string at that point. So the sound created by the strings is completely synchronised with the image.

The experiments at CERN are meant to replicate the conditions in the universe shortly after the Big Bang, with matter formation – when there was enough energy zooming around in the universe for particles to collide at very high energies – and how matter was formed. We like to think we’ve created this immersive experience of matter formation, through the language and processes of science and technology. 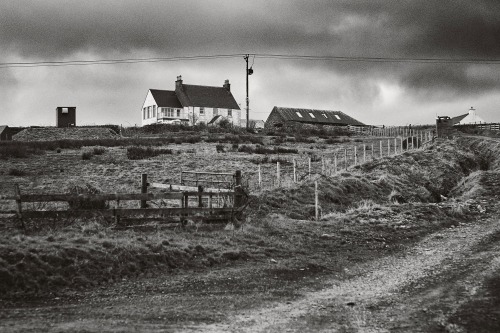 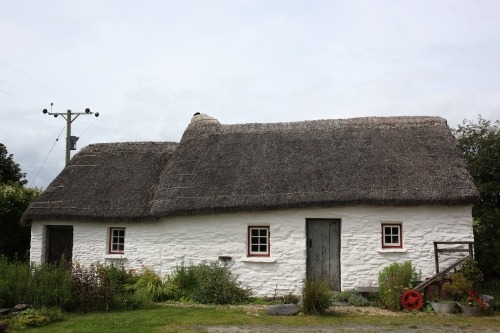 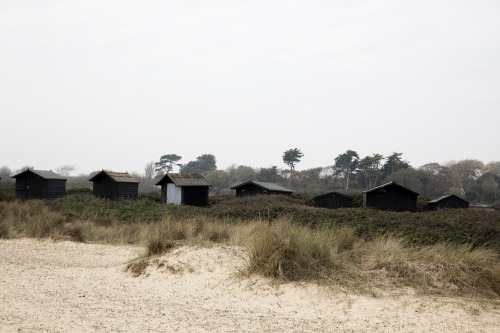 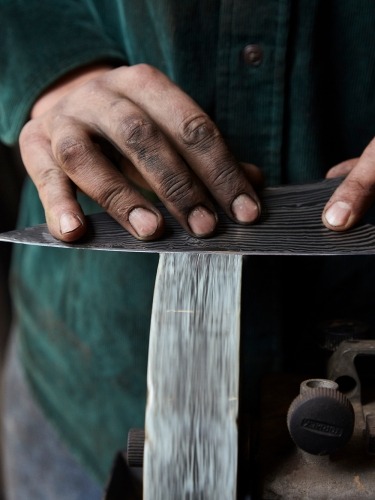 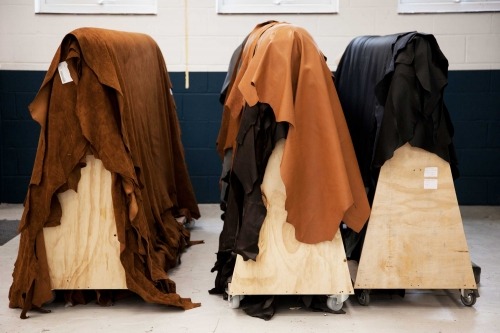 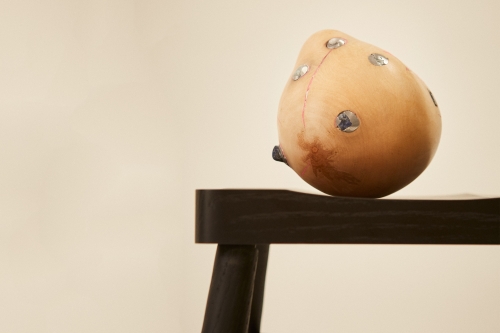